GameChanger recently released an all new app, GC Team Manager. This wonderful new product helps youth sports communities communicate, coordinate, and organize their team’s lives. I have been lucky enough to be on the team that gets to build the backend for this new app. Throughout building out this completely new backend, I have gotten to work on a lot of different pieces of the system. The one I want to dive deeply into today is our sync system.

Sync is a pretty generic, buzzwordy programming term. Therefore, it is important for me to clarify what sync means in this context. In this article, sync is the processes of ensuring that all devices in our system have a shared, up to date view of the world. If one device sees the state of Team A one way, all other devices should see the exact same state for Team A. If a device makes a change to Team A, that change is reflected instantaneously across all other devices. Note that this is the ideal version of sync. There are many constraints and challenges that make this hard to achieve but this is the goal I set about building towards. The reason sync needed to work this way in our app is:

Having settled on what sync means, the rest of this article attempts to describe the design and architectural decisions and trade offs that went into solving the sync problem for our new Team Management app. There will be a follow up article that dives into the nitty gritty implementation of our sync system. But before I can fully describe the trade offs made in designing this system, I must describe the constraints of this system:

Given the constraints I talked about, I wanted to cover 4 broad alternatives we ran through when designing this system. For each architecture I will discuss the pros and cons of this system. At the end I will describe the architecture solution we went with for our sync system. 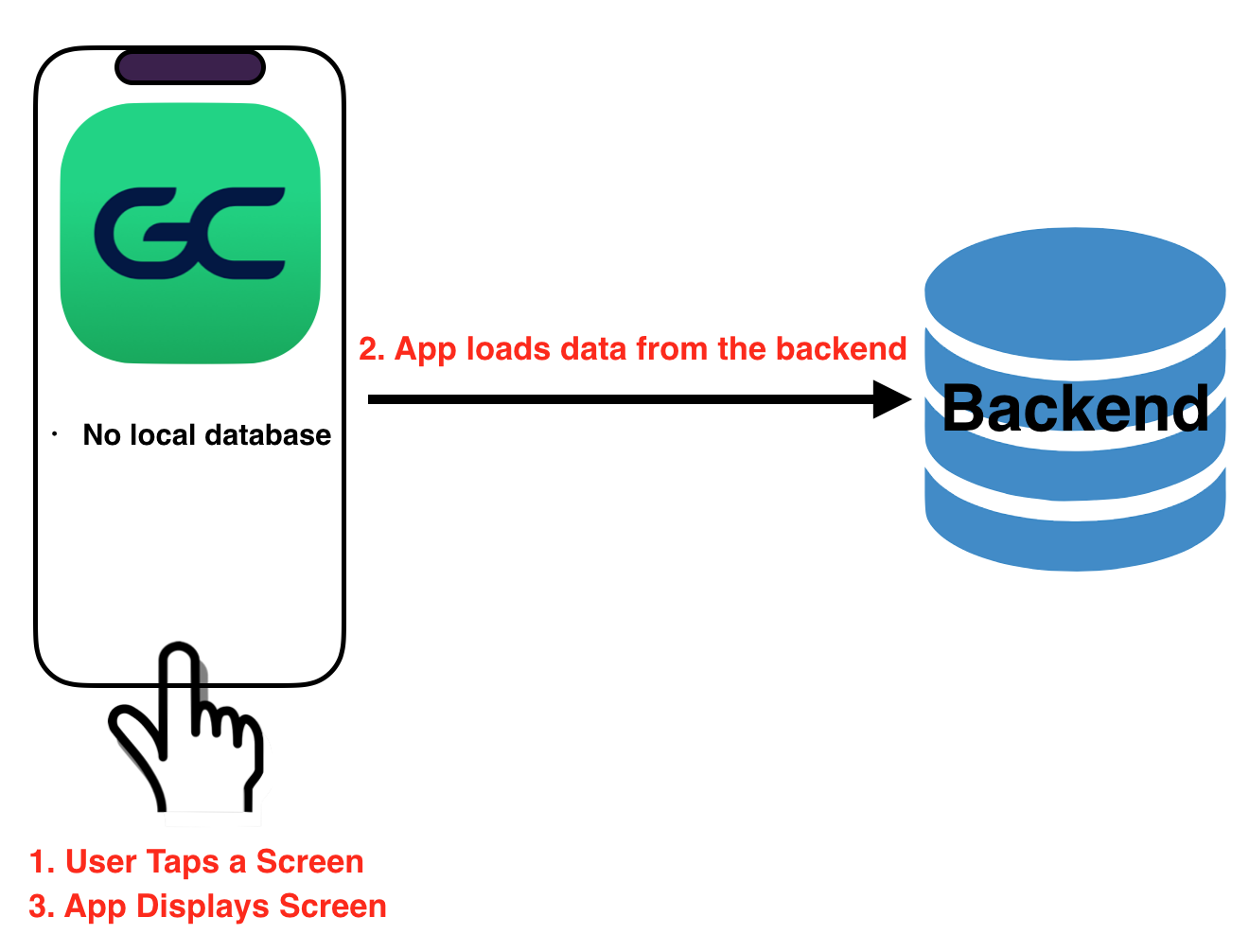 The idea behind just in time load (JITL) is pretty simple. The app stores no data locally, i.e. no local database. When it needs to display a new screen on the app it goes to the backend and loads all data it needs. It then takes that data and displays it as needed on the device. On the next screen, the app simply rinses and repeats. 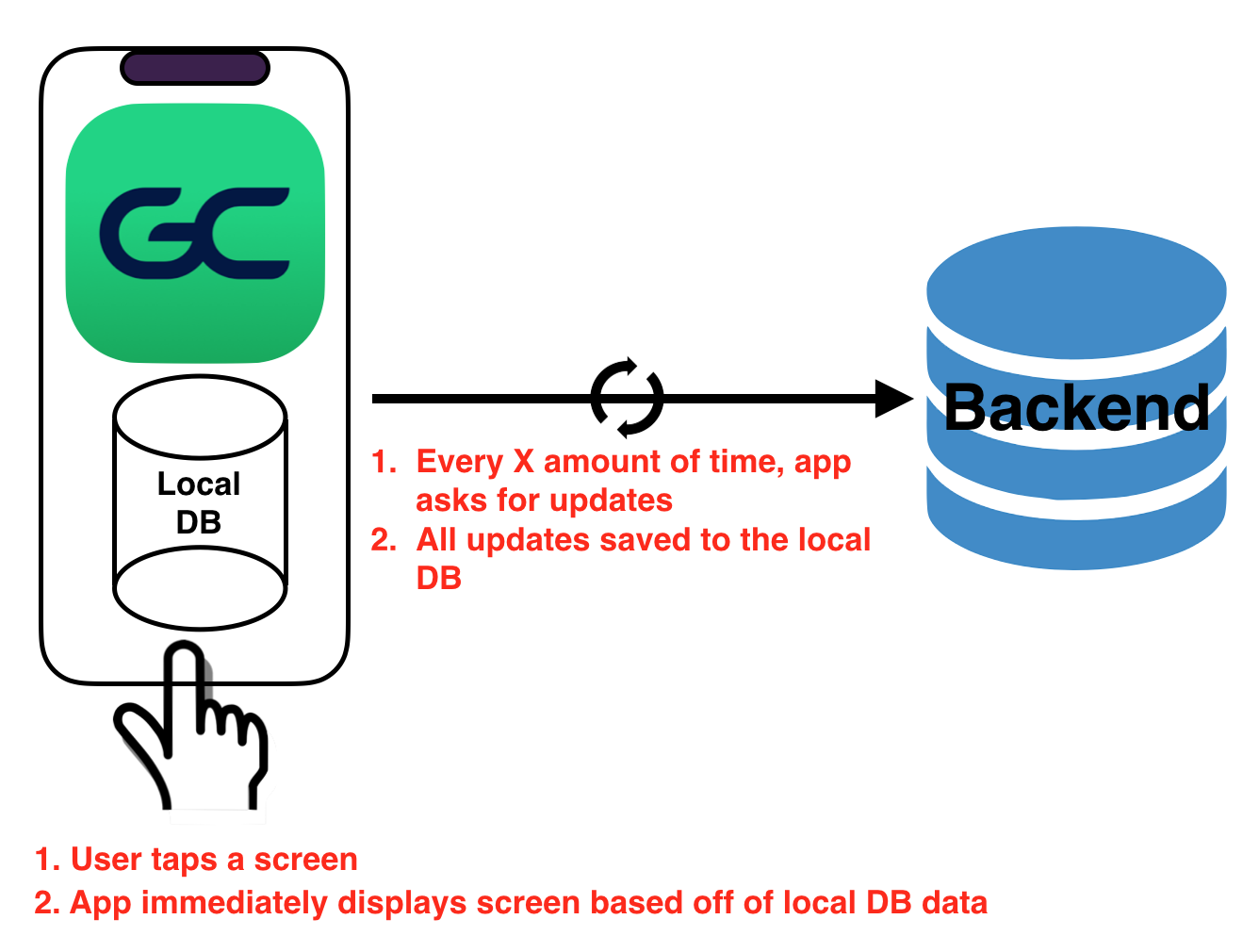 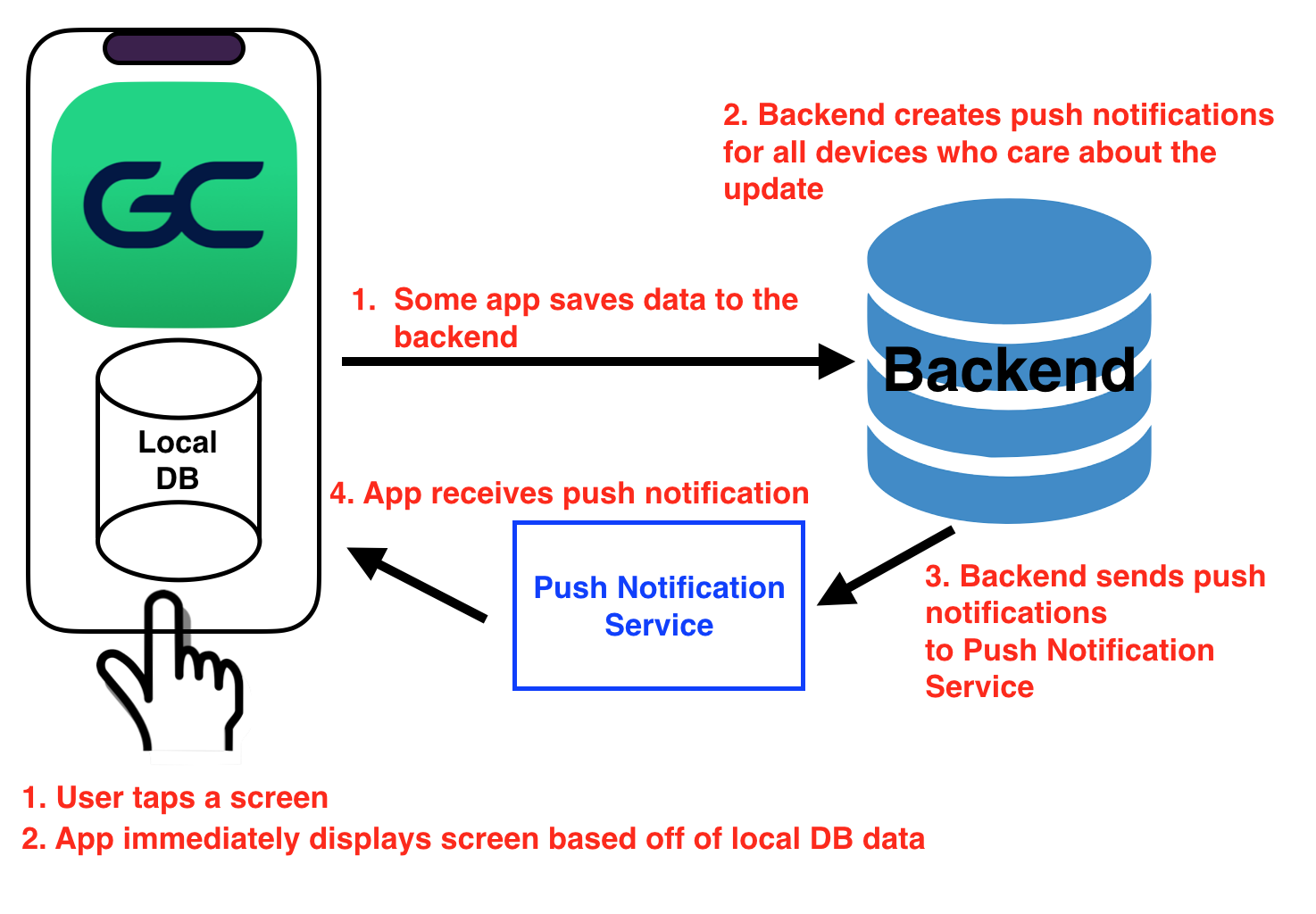 Targeted Push Notifications (TPN) builds on the failures of the AP system. It keeps the app local database which confers the same speed and offline benefits as in the AP system. But now, when an app saves data to the backend, the backend is responsible for notifying all devices who care that something has changed. The backend does this by transforming all database updates into a set of updates per device and sending updates for those devices to a push notification service (something like APNs). 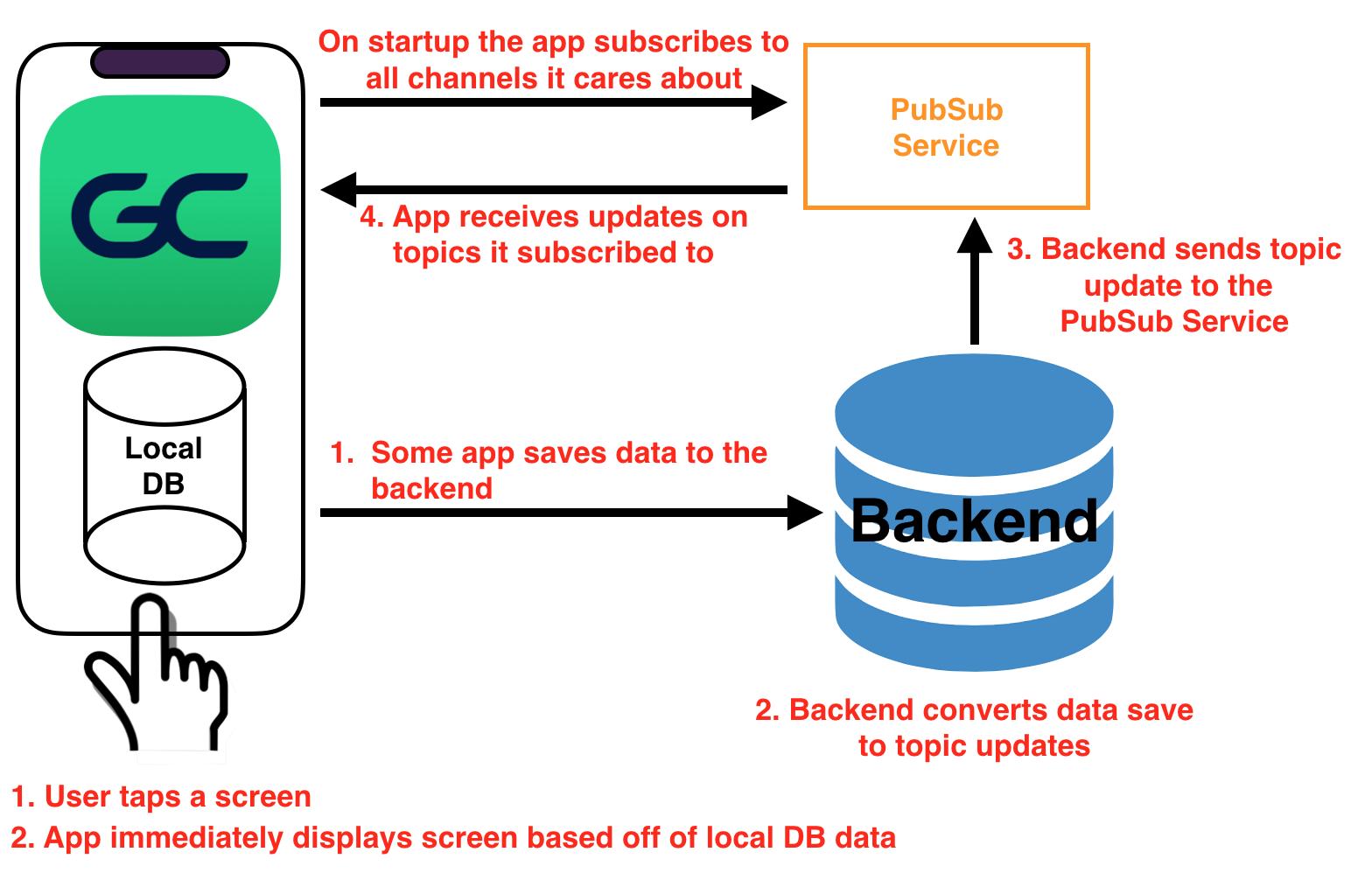 The Pub/Sub solution is very similar to the TPN system. Both have a local cache. Instead of transforming database updates into device updates, the Pub/Sub model converts them into a series of topic updates (In our case teams, persons, etc). These topic updates are sent to a Pub/Sub Service. At the same time each device subscribes to all of the topics they care about. Then, when a new topic update is pushed to the Pub/Sub Service, all devices subscribed to that topic get that update.

What level should updates be at? - see TPN open questions

So I have discussed four different solutions with different trade offs we could use to build our sync system. Which ones did we go with and why? The final implementation of our system is very much based off of the Pub/Sub system described. On top of that we needed to add a way to handle out of order delivery guarantees and wanted to send targeted updates. The reasons we chose this implementation are:

If you want to learn more about the specific implementation this solution, check out my follow up blog post.