In my last article I talked about the sync system for our new GC Team Manager app and the trade-offs we considered in our design process. To reiterate, the high-level structure we settled on was a backend Pub/Sub service, with small granular updates, and we needed to account for the lack of ordering in message delivery. In this article I will cover how we implemented and made this sync system work.

Handling Out of Order Messages

When thinking about the out-of-order messaging problem, the goal is to ensure that no matter what order message are received in, all devices will end up in a consistent state. When we were thinking through possible ways to do this in our sync system, we realized that the type of message being sent can help you solve this problem. As a demonstration I will consider three types of updates the backend could send to the app: send the data values of the updates, send the type of data change(update, delete, etc), or just send the id of the thing that changed.

Scenario 1: Team 1 is created then updated. All apps receive updates in the correct order

Scenario 2: Team 1 is created then updated. All apps receive updates in reverse order

As you can see, all update types work when messages are received in order. But as soon as messages start to be handled out-of-order, sending the id and the type of update is the only method that cannot lead to incorrect app side data. All the device has to do when it receives an update is to go to the respective API resource endpoint and load the current data. This method will always lead to the app having the most up to date data. (Note that the type of objects sent in our updates map nicely to the resources of in our API.) This simple update then reload algorithm lets our sync system be robust to out-of-order messages. 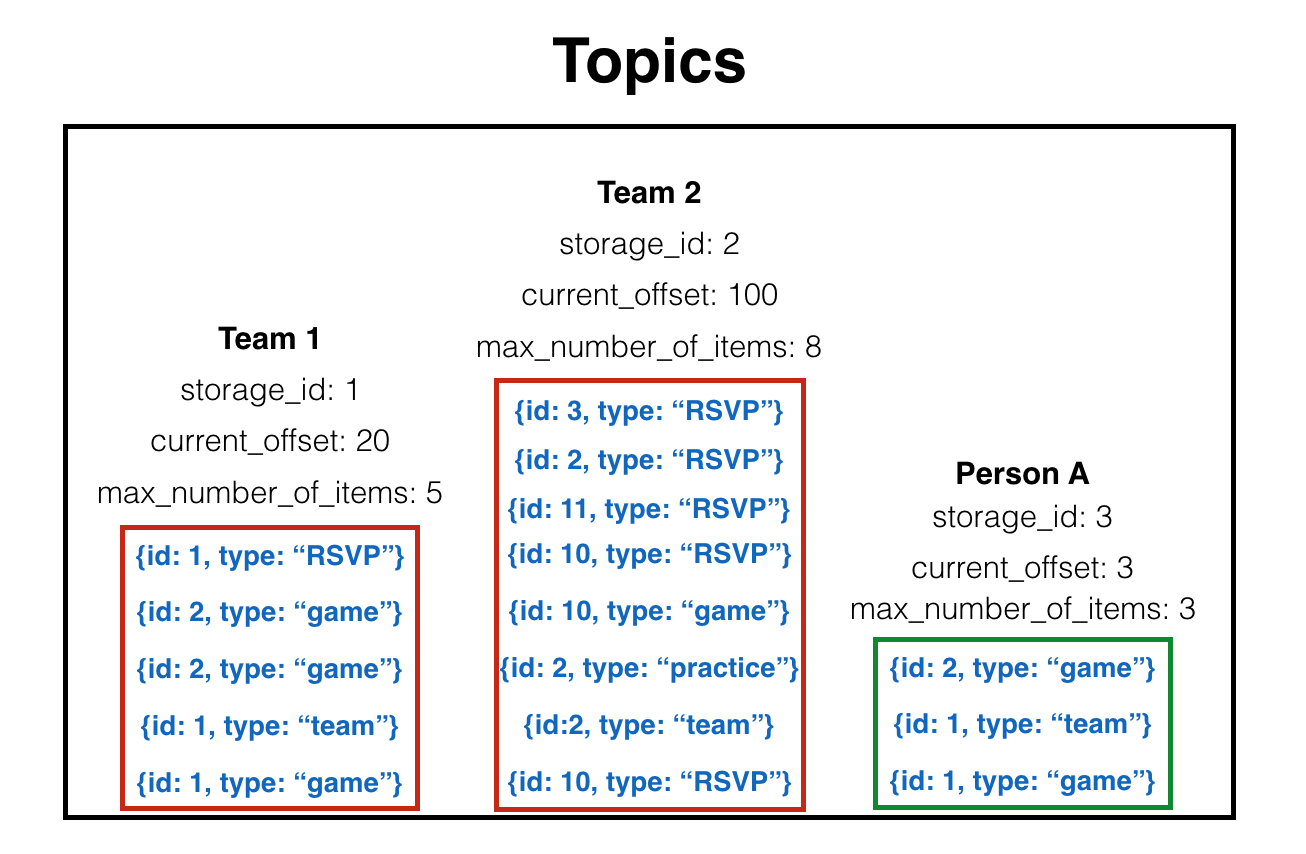 We now have a type of update that we can send that allows the system to survive out-of-order messages. But specific updates are just part of the solution. I also need to discuss the topics themselves and how they are structured.

Given the structures above we use the following algorithm in Asynchronous Polling Sync:

This algorithm and the structures described make it very easy for the app to get updates it cares about, every X minutes, without having to worry about out-of-order messages.

Where to store Updates

Now that we have a robust app sync algorithm, we still need a way to start pushing updates into the topics when someone alters an API resource. Before we can decide how to transform backend updates to sync topic updates, we first need to figure out where to store our updates. What type of database should we use? The main database for our backend is Postgres. But there were a few reasons we were hesitant to just stick our updates in Postgres:

We needed a system which is super fast, has great list support, provides transactions, and is simple to get up and running. For these reasons we decided to store all of our updates in Redis. 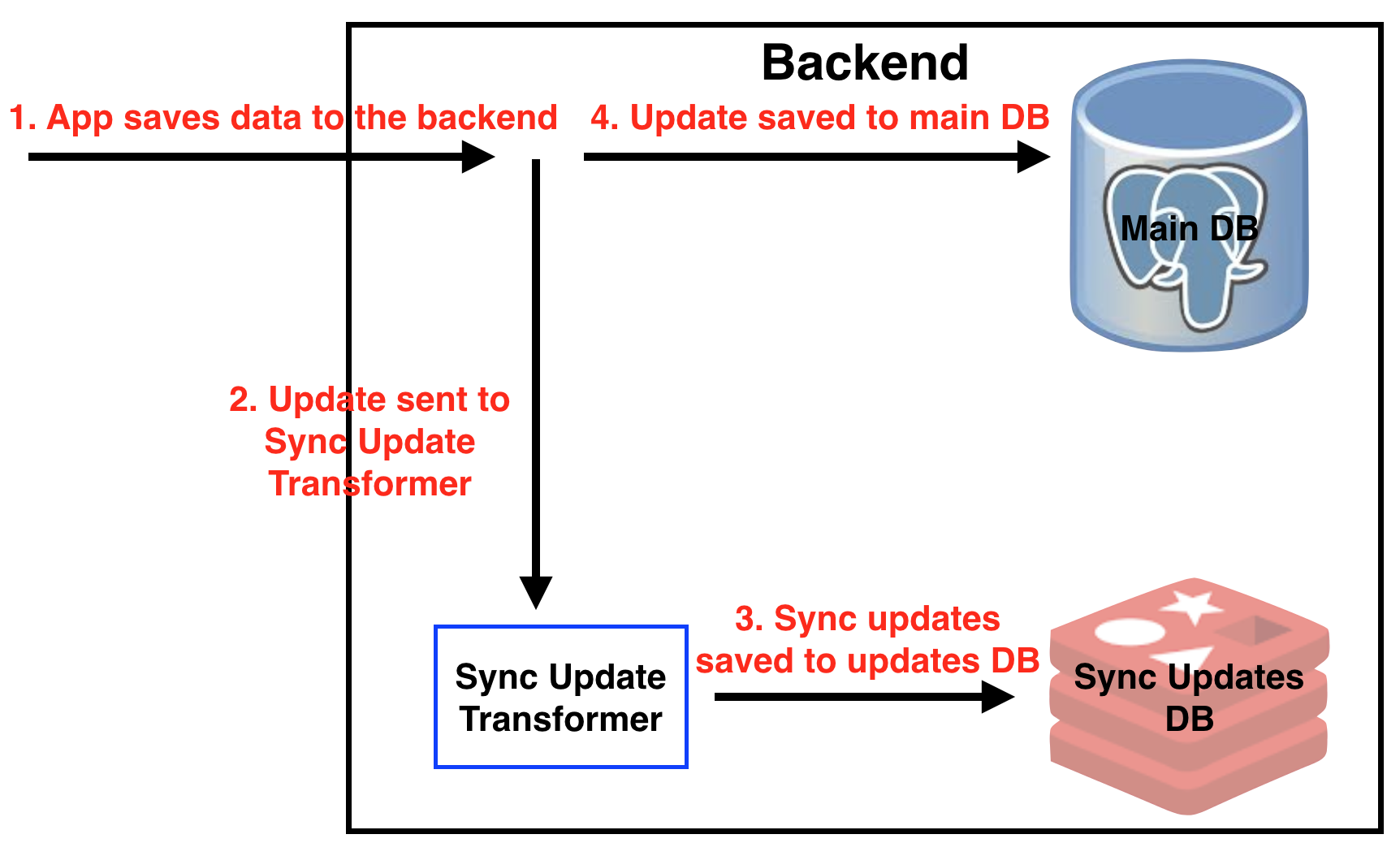 So we now have the place to save our updates, but we still need a way to translate the Postgres database update to sync topic updates. We need some sort of transformer like in the picture above. This transformation actually ends up being very easy. We have a 300 line class which takes in query and update objects for each Postgres write and transforms those into a list of topic updates. The topic updates are then saved to Redis and then the main database updates are saved to Postgres. A simplified version of our transformer class can be seen below.

After we had built the features and functionality described above, Asynchronous Polling Sync was finished. That left us the time to prioritize and build Pub/Sub Sync when it became appropriate.

The main difference between Asynchronous Polling Sync and Pub/Sub Sync is that Pub/Sub Sync replaces the Asynchronous Polling loop with a Pub/Sub service. All other parts of the system remain the same. This allows the devices to receive updates near instantaneously. Once again there are two pieces to consider when we built out Pub/Sub Sync, the algorithm to use for sending topic updates to the devices and how to actually build the Pub/Sub service. 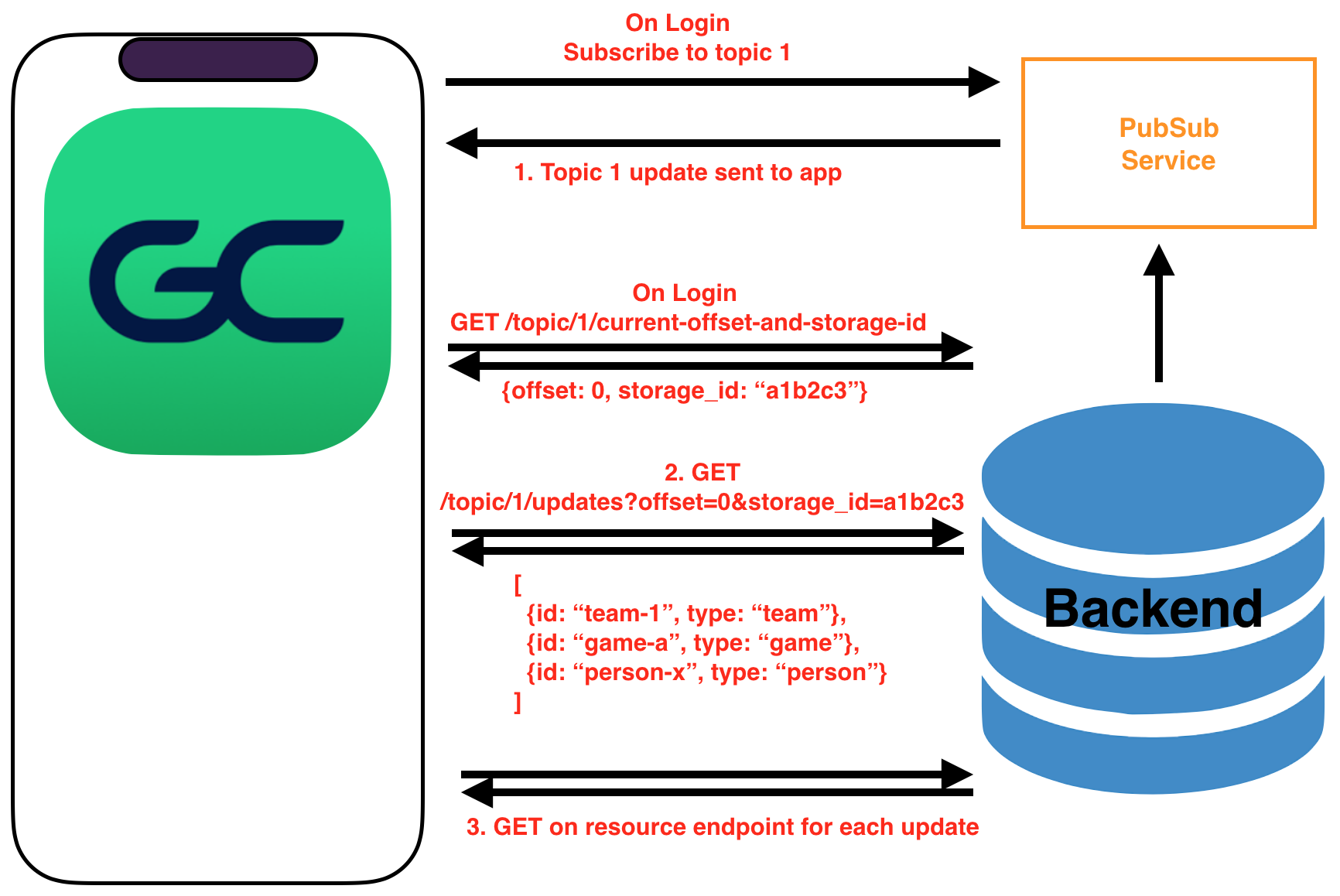 Similar to Asynchronous Polling Sync, there are many different algorithms we could use when pushing updates to the Pub/Sub service. Originally we just planned to send the full sync updates to the Pub/Sub service. This strategy ended up being suboptimal because there are times when Pub/Sub messages are dropped and not sent to the devices they were supposed to. Sending our full topic updates meant our algorithms depended on all devices receiving all sync updates. When this turned out not to be true we would then require a lot of extra complexity to handle dropped messages. Instead, we decided to just send a blank update that indicates something has changed on the topic: {changed}. When a device receives this message, it attempts to load all updates in that topic. For each update it loads, it GETs the proper resource from our API. This algorithm adds an extra step and network call, but keeps the overall algorithm very simple.

How to send Pub/Sub system updates

We now have an algorithm we want to implement to finish up our sync system. How do we build out this Pub/Sub service to send updates? Lucky for us, after some research and thought, we were able to find a prebuilt system that could serve as our Pub/Sub service: Google’s Firebase Cloud Messaging. (Specifically FCM’s topic feature). This free system allows devices to subscribe to topics and will make sure messages sent to those topics are delivered to those devices. The system also has a bunch of nice features: storing a certain number of messages per device if an app cannot immediately be reached, a very long TTL for messages, a pretty high per topic rate limit, and seemingly no overall rate limit. This system was also very easy to integrate with from both the client and backend side. We pretty much just dropped in FCM as our Pub/Sub Service and with that our sync system was finished. 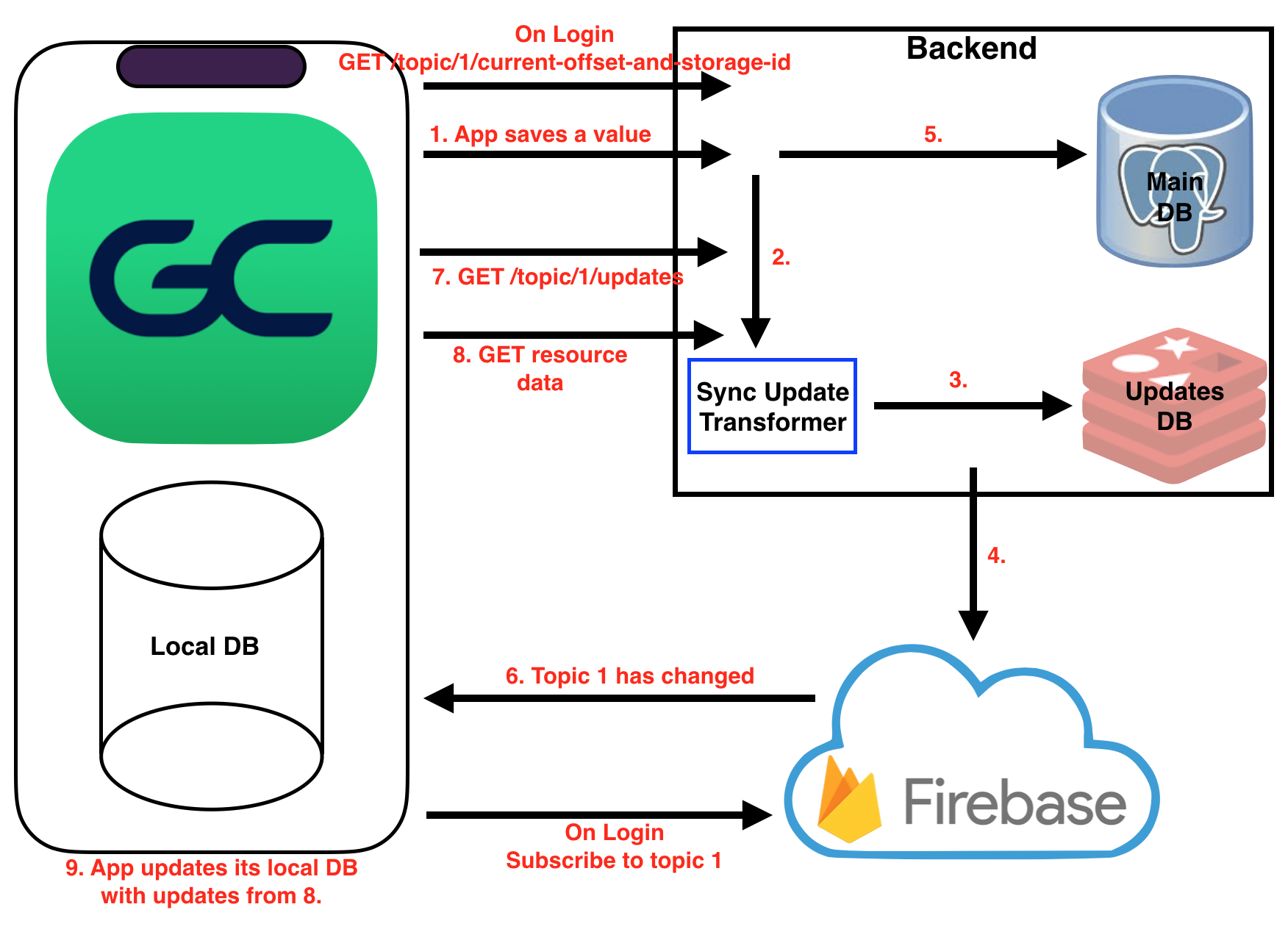 We have come to the end of our discussion of our new sync system. We started out with an ideal sync system and some constraints on what our system needed to be able to do. We covered the trade-offs and criteria we considered when designing our system. Finally I covered all the technologies, algorithms, and systems needed to implement a sync system incredibly close to our ideal. The full flow implementation of our system can be seen above.